Find what you want, Love what you find!

Check out this article for our review of the 7 best electric weed burners to tidy up your garden or allotment in minimal time.

There are various electric weed burners available to suit your budget, including a gas flame gun, heat gun, garden blowtorch, and thermal weeder. We will cover all of these in this article.

If you want to scare your weeds into halting growth, invest in a heat gun. They are affordable but require electricity for use. Cordless heat gun varieties are available, which is a handy tool for a garden allotment.

A garden blowtorch is great for use in the garden or allotment, due to the use of its butane gas, which provides a flame to destroy weeds. This tool has a lightweight extended handle for safety and is also environmentally friendly and free of chemicals. Weeds are exposed to such high heat that their internal cell structure withers and dies within a day or two. Prices start from under £20.

If you want the king of electric weed burners, the thermal weederis what you want to invest in. They are larger than the other electric weed burner varieties mentioned but are safe to store in a shed, or some varieties arrive with a heat stand for cooling. Again, no chemicals are required to kill the weeds, just the power of heat and electricity. These are extremely safe to use in the garden without the risk of a fire. Thermal weeders feature a directive cone, which targets the weed directly to destroy its root. Thermal weeders may not be the best choice for allotments, as they require electricity to work, and there are no cordless varieties.

Want to kill weeds dead without bending down or physical exertion? Consider one of these top electric weed burners. 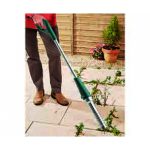 The Bergman electric weeder is a good investment when you want to keep your garden, drive, and patio weed free. It has a long extendable handle to reduce pressure on the back, and this weeder effortlessly burns weeds with just the press of a button. It does run on electricity, so is not suitable for use at an allotment. Your garden is kept free of harmful chemicals with this handy weed zapper. The Bergman electric weeder is available to buy from The Expert Verdict and Scotts of Stow. 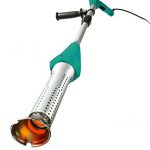 Keep your garden and drive weed free with the Scotts of Stow electric weeder, at under £50. Effective on weeds like dandelion, this electric weeder effectively cauterises weeds directly to their roots. It features a protective cone, which protects the head from causing accidental damage to close plants. 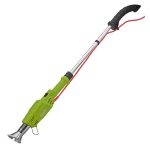 At such a low price, the Garden Gear weeder cauterises weeds at up to 650 degrees and is a great investment for your garden, patio, and driveway. It features an extra long nozzle to prevent bending. This environmentally friendly garden weeder eliminates the use of harmful chemicals and keeps gardens tidy and free of weeds. There is no need to worry about any damage to surrounding plants, as its directive cone targets only where you focus it. It features a 24-month guarantee. 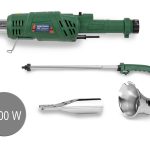 Lightweight at only 1kg and affordable at under £36, the Wolfgang Electric Flame Gun features a myriad of tools for effective weed killing in your garden and surrounding areas. It is extremely safe to use, and it’s flame gun renders effective for starting barbecues and briquette lighting. This flame gun heats up to 600 degrees for fast weed burning. 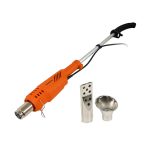 This blowtorch by Tooltime UK is affordable and heats up to 650 degrees. It is lightweight and easy to use. It also features an integrated stand for an effective cool down after use. Target weeds in your patio, driveway, and garden. 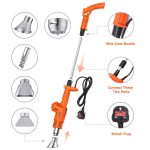 This heat gun reaches up to temperatures of 650 degrees making it an effective tool for annihilating weeds. It treats driveways, paving stones, and stone curbs and has an extra long 1.8m cable. Features five nozzles that treat various areas of the garden. 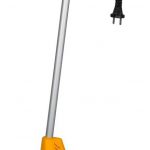 Although one of the more expensive electric garden burners, the Hozelock thermal weeder destroys plant cells and weeds in only seconds via a thermal shock that reaches up to 600 degrees. It has a protective shield to protect from any nearby plants. Requires no chemicals and is safe for use on patios, paths, and driveways.